I had the extremely good fortune to visit a fort on my recent trip. I love history, there’s a certain aura to the things that have long past, deeds of great men and women who walked these places before you, and despite trying circumstances, left an indelible mark on the landscape and the psyche of the place. I’ve been envying friends’ Facebook photos on the same topic since I can remember.  You would think someone from a country with such colorful history should love and celebrate it, but no. Not my folks. There’s a volley of excuses hurled by them… “Who’s gonna walk so much?” …“Do you know how steep it is?”… “It’s late, there’s hardly anyone inside. You don’t want to be stranded here when it gets dark” (classic)…………… “But mom, there’s a 300 year old temple inside, don’t you want to see it?” “Why didn’t you say so?” (Problem solved! 😉 )

I knew the temple wasn’t going to keep them occupied for too long, so I made the best of it. It was indeed lonely, as we were nearing the closing hours. One look at the fort, and it seemed like time had stopped for the past few centuries. The complex was amazing, and with so many chambers, it would be easy to get lost. I had the audio guide with me, but I chose to switch it off and wander wherever my heart felt like. Here is the courtyard with the 250 year old Banyan tree where festivities must have taken place, and over there are the stables for the horses. There is the garrison that stocked the armaments, and over there are the ruins of the living quarters of the soldiers and their families. In the quietness of the evening air interrupted only by the occasional chirp on top of this mount, and with the soft golden glow of the setting sun illuminating the area, I sat amidst the remains and had a strange feeling like I had returned home. My Hindu brain has always imagined itself to be a native of some such fort in a previous birth. Imagining that I was SOMEONE in another lifetime. Someone who mattered. Someone whose story was worth being told. Someone who had friends. Someone who felt alive… Heaven knows I’m just another EXTRA in this gigantic movie theater that God has created this time round.

I could imagine kings in their splendor in their palace, working with their ministers for the welfare of their subjects. I could imagine the gallant charge against invaders by brave army chiefs and soldiers amidst heroic cries and the clanking of metal. I could imagine the bells ringing, and trumpets blowing welcoming victorious braves back home amidst a rain of flowers… Aah if only I could see it today. If only these barren walls would talk.

I sat in meditative silence after covering most of the fort and exhausting my memory card capacity. I had forgotten the present world completely, till my father’s call brought me back. Time to leave, sadly. Wish I could stay longer. A few more minutes in the company of these walls… Imagining their stories… Absorbing their timelessness. You may read and hear as much as you can, but the mysteries of these places and their people are never fully understood. Feeling deep gratitude for this amazing opportunity, I took one final look around and left, hoping I could come back once more. 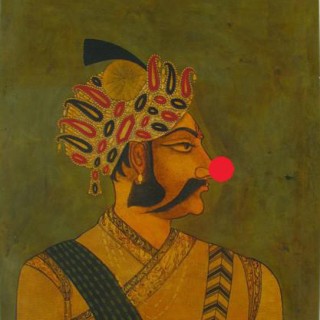